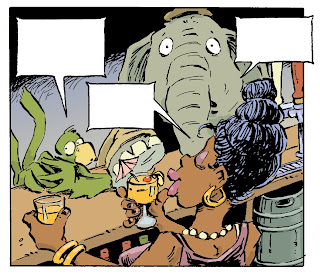 But it’s the inconsistencies around anthropomorphism that can be the most fun. Maps mysteriously appear and disappear in Cracker’s plumage, but when he pulls out a bill to pay the cabbie, Otto really takes notice. His realization that Crackers is carrying around cash leads to the following exchange, as jet lag and the frustration of their search for Georgie finally blows the top off their collaborative efforts.
Posted by Bill Slavin at 2:47 PM No comments: 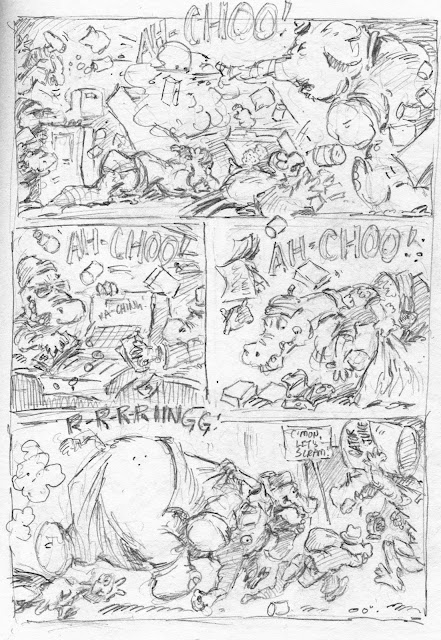 In my on-going education and elucidation, I can say, unequivocally, that elephants do not have thumbnails. Toenails, yes, and lovely ones at that, but the lack of thumbnails is inexorably hinged to the lack of thumbs which creates no end of troubles for an illustrator who needs his elephant to, well, hold things. But that remains for a future post – the visual pitfalls of anthropomorphism!
In talking about storyboarding, or thumbnails, I’m really reaching into the vault here, as this was a process started over two years ago. Much of the original storyboarding for Big City Otto (book one of Elephants Never Forget) was done on a trip to the Azores, my partner Esperança’s birth place, in the summer of 2008. It was a memorable trip for the fact that most of my two-week stay on those beautiful islands was spent in the hospital waiting room, while Esperança attended to her mother who had become quite ill a few days after our arrival. Fortunately I had the Otto manuscript and my sketchbook in hand, and the visual story just poured forth over that time and the weeks following when I returned home. I remember it as a golden summer spent sitting and drawing on my back porch while the weather held. It was a very creative time, working with nothing more than pencil and sketchbook, liberated from art table and computer screen, and really just letting the creative juices flow. It was the cliché of the artist’s life and so far from the reality of what it usually takes to make a living as an illustrator.
The months of work spent on those thumbnails was all speculative work, something that is familiar to the writer but less so to the illustrator who usually has contract in hand before pencil goes to paper. But the fruit of those days’ labour was a fully-realized manuscript complete with sketches, and I honestly believe that this lead to the subsequent acceptance of the story for publication.
When I speak of thumbnails here I’m really referring to the art of storyboarding, or getting the story down in small simple quick sketches. It is at this stage that I’m working out points of view, lights and darks, where the text will likely fall and how the action will be communicated over how many panels of storytelling. The thumbnailing is always the most creative part, in my view, of the entire process, a chance to tackle the bare bones of the visual narrative without getting hung up searching for references or fine-tuning the drawings. That all comes later, once I settle into the pencil roughs, many of which I’ve reproduced previously here in the posts of this blog.
But the thumbnails are really the heart of the whole thing. It is where I get my hands deep into the clay of storytelling, and in those thumbnails lies the energy and compositions for my later drawings. I refer constantly to these small sketches as I work on my pencil roughs. When I stray too far from those original imaginings the picture starts to loose its energy, gestures become wrong, angles of view too acute. So I constantly find myself returning to those very first spontaneous sketches to bring myself back on track, to those sketches that will serve as a road map for the months and months of hard work that still lie ahead.
Posted by Bill Slavin at 2:50 PM No comments:

Some Thoughts on Visual Literacy

Below is a bit from a talk I did a couple of years ago at the Saskatchewan Reading Council conference in Regina. I think I alienated half my audience and bored the other half (note to self – don’t try to do any heavy-thinking at a luncheon key note) but I think the thinking is good enough to share here and ties in directly to the value of graphic novels in libraries and classrooms. 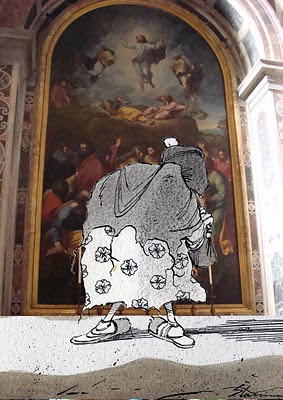 The adage goes, “A picture is worth a thousand words.” But I think there are few things in this world less well understood then the art of visual communication. My profession uses pictures, an even older form of communication then the printed word, and the basis of most of the world’s alphabets. For us visual artists, words are the new Johnny-come-lately, and although expedient and easy to use, still viewed with suspicion.

Going back to pictures, we can remind ourselves that there are and always will be many ways and means to communicate. Every pre-literate child begins their relationship with books through the pictures in picture books, “reads” the stories through those pictures and uses them as a spring board to understanding those arcane marks on the page we call words.
Because, as we all know, the pictures are the first key to a story in the preliterate mind. Like those massive and age-darkened canvases that loom out of the shadows on the walls of ancient churches and cathedrals, a picture book’s illustrations are there to bring alive and communicate a story to an audience that is unable to read.
I think at some point many of us lose our ability to “read” the visual, slip into a sort of visual illiteracy in a sense, as we attach more and more importance to the words that symbolize things, and stop truly seeing the pictures that may accompany those words. I constantly see evidence of this – from the fact that children often recognize what is developing in the narrative of a story, by reading the visual clues, before the adult does, to picture book reviews that give only a cursory note to the illustrations or fail to mention them at all. I’ve even read reviews that attribute entire portions of the narrative to the author that were only told in the illustrations and were the illustrator’s contribution to the book, a case where the reviewer is so blind to the role the illustrations play in telling a story that they didn’t realize part was being told in the pictures.
I remember reading a short story once, by C.S. Lewis, I think. In this story he describes a series of passing images, amorphous and indistinguishable blobs of shape and colour, with no real discernable pattern. At the end of the piece you discover it was a trip in a car, seen through the eyes of someone who has become so separated from their ability to actually see, that this is what their visual world had been reduced to. I think we are all born with the ability to truly see, but as we start to order and make sense of all of this stimuli entering our brains, we slowly prioritize and discard, give names to objects, and in naming them, stop seeing them for what they truly are. So a “chair” becomes the archetype of a chair, the word “tree” becomes a substitute for all trees in their many and varied guises, and in the end we rely heavily on a literal shorthand for this visual world around us, and stop effectively seeing. We all do it, even artists, but I think the artist, by constantly exercising this part of his brain, perhaps holds on a little more to the ability to actually see as we did when we were children. 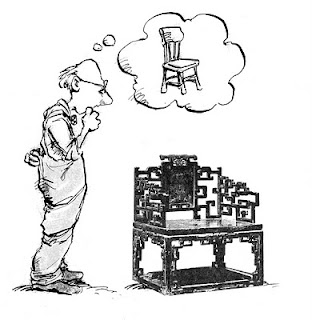 But in this world we all live in, bombarded constantly with visual imagery, perhaps we all need to relearn, in small ways, how to see properly. It could well be that today’s children and even their young parents are one of the most visually literate generations this world has seen – children raised (some might say gorged) on a banquet of imagery, from television to computer games. Comic books are being read, not so much by children, but by a generation well into their twenties and thirties. It’s the same generation that is driving the computer game industry. Pictures are no longer just kids’ stuff.
Posted by Bill Slavin at 8:03 AM No comments: