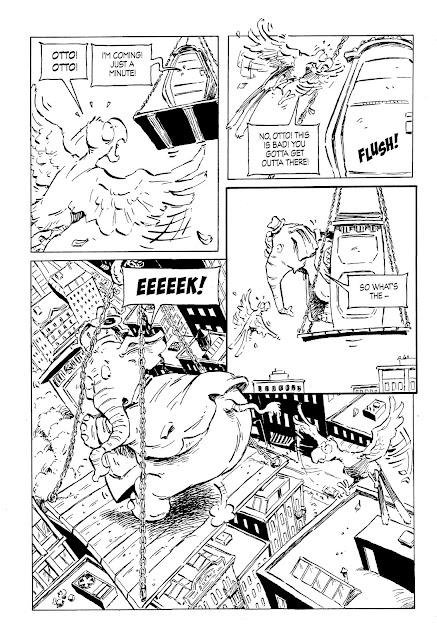 I suffer a bit from vertigo. I think I first realized this when I was five. Having just broken my brand new tommygun squirt pistol (received that very morning for Christmas) over David Longstaff’s head (he deserved it) I fled to safety in a nearby tree and then couldn’t get down. Stuck in the tree, there was a moment there when the idea of letting go and falling seemed so much simpler than trying to climb down. I was eventually rescued.
When I was inking in this page this week it got me to thinking again about why I’m so often drawn to these perspectives. Suffering a bit from vertigo one would think I would shy away from some of the perspectives like the one above. But if you look at vertigo as less a fear of heights, and more a potentially lethal fascination with heights, or perhaps even a primordial desire to throw yourself off the nearest cliff and engage in flight, it all makes a bit more sense. I love drawing images from this perspective, and, like all of my work, it gives me a chance to break the bonds of reality and enter into imaginary worlds.
When drawing this perspective, I’ve found over the years that the rules only get you so far. This is true in almost any perspective-based drawing, but especially in views from above. I’ve adopted those rules to a vague sense of where the vanishing point is, and then altering that as I move though the drawing. As a result, you get more a sort of vanishing idea, altered continuously with small adjustments in the direction of what looks right, and in the end creating a sort of fish-eye lens approach to your drawing. There is no real scientific way to describe this (and I expect others have described it better) but it really is a skill gained through a lifetime of continuous drawing and observation and learning to trust in your intuition. This is especially true in aerial one point perspective. If you look at the image below, which at first glance would appear to be a simple case of one point perspective, you will see how the cacophony of vanishing points helps create that sense of vertigo. Even the horizontal grid lines, that you would think would be pretty rigid, bend and bow as they move away from the cross created by the main streets. 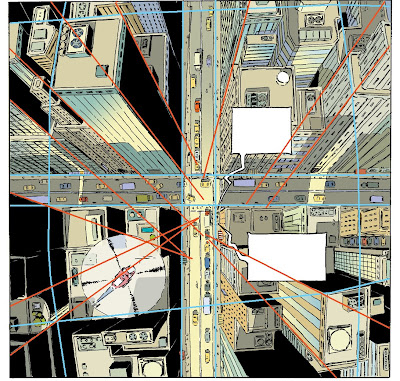 Aerial view from page 23 of Big City Otto, showing the cacophony
of perspective lines used in creating this image.
Posted by Bill Slavin at 8:28 AM

Email ThisBlogThis!Share to TwitterShare to FacebookShare to Pinterest
Labels: drawing