Drawing with Character: Part One

The Heady Bit …
I was writing up some notes for a presentation I will be making at the Packaging Your Imagination conference in Toronto on November 5 and I thought the observations around visual character development were worth repeating here. Although this particular talk is more directed to picture book illustration, much of it applies equally well to character development in graphic novels. 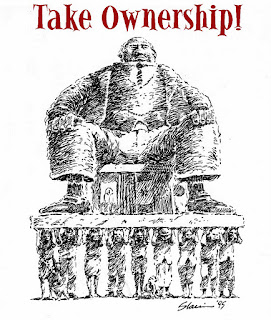 One cannot talk about character development without talking about the story in its entirety.
As an author/illustrator ownership is obviously not an issue. But as an illustrator of someone else's story, ownership is key.
You need to remember that you are a 50% partner in the relationship, and, for the duration of your work on the project, 100% owner. Only by fully embracing the story as your own can you give it the life and verve that will come from the tip of your pencil, brush or stylus.

Think of the story as your story, the book as your book. This isn't to cut the author out of the process but rather to put yourself in a mind set that will allow you to give your very best to the story. Because at the end of the day, your responsibility isn't to the author but rather to the story itself. You as illustrator are not simply a third party mediator between author and reader but a bonafide story-teller in your own right. And your story is the drawn one. 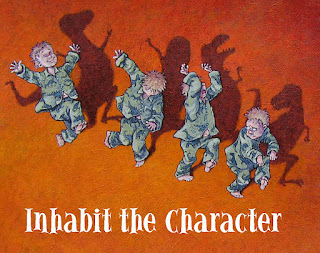 To really portray a character effectively you need to inhabit the character fully. You need to crawl right into its skin and peer out through the eye holes. This is the case whether it is a person or dog or cat or pig or whatever. You need to move beyond thinking of the character as separate to yourself, a third party entity.
This will help not only with character development but also the drama of the story. And again, the two are inextricably linked. There is an elation in inhabiting the character. As illustrators we are blessed with the opportunity to travel through our imaginations, do things we would never dare do, all from the safety of our own desk.
Draw on your own experiences fully in the process of this possession. This will be easier with a character that is sympathetic to your own personality but in this respect we all have to be fairly versatile actors, and usually there is something within ourselves that we can dig deep and latch on to when we put pencil to paper.
It is said that when an athlete watches a film of someone doing their sport, in their mind all the same signals are being sent out as if they were actually doing the sport themselves. Or something like that.
So we have to be the athletes of the drawing board, feeling in every fibre of our being the same thing that the character in your story is feeling. And in doing that the character will emerge. 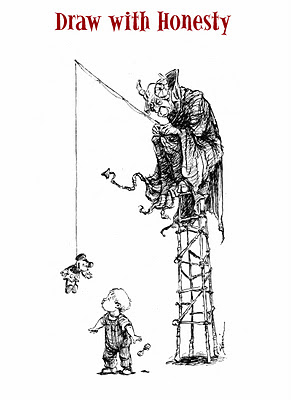 Whatever you do with your character, stay honest to the story. If your character begins to act and react at odds to the written word then you will loose credibility to your audience and do a disservice to the author. Read the story well, and in the process of inhabiting the character make sure that the character you are inhabiting is the one that the author has written.
One of the most gratifying comments I have received is when an author says that they feel as if I have crawled into their head and put their thoughts on paper. It is not of course the author's head one crawls into, but rather the story that has sprung from that author's head.
If you try to be too clever, too sophisticated or generally start drawing with other motivations then simply to tell the story, then you are in danger of taking the visual tale somewhere that does the story discredit.
Next time: The Practical Bit!
Posted by Bill Slavin at 1:41 PM No comments:

We had a great send off for Otto on Saturday, October1. In the company of friends, fans and relatives Otto and Crackers set sail on the Great Graphic Sea, hopefully to populate far-flung shores with multiple copies of his book (hint, hint)!
The launch, at Titles Bookstore in Peterborough, Ontario, was replete with five (count 'em!) different kinds of peanuts, free Gator Jus and comic sampler give-a-ways. I had the pleasure of reading from Big City Otto ( I blew up the pages real good!) talking a bit about the process of creating the comic and doing a bit of sketching for my loyal fans.
And what graphic novel gathering would be complete without at least one fan arriving dressed as her favourite character!