In Praise of Asterix 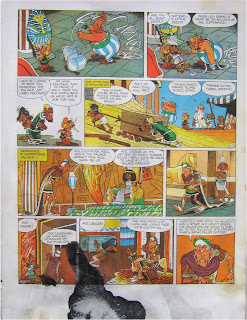 I was in my local library the other day when I was thrilled to notice the librarian checking in a brand new stack of Asterix books. It’s one of the wonderful trends in libraries these days, the introduction of comic book art, and it’s terrific to see these old chestnuts being discovered by a new generation for the first time.

Among the collection were Asterix and Cleopatra and Asterix in Britain, my first (and second) Asterix books that I ever owned. Asterix and Cleopatra was brought back to me from England by my brother and sister-in-law in 1970, which makes my dog-eared and bedraggled copy now 40 years old and possibly one of the first in English translation to reach Canada.  I went on to read and collect almost all of the Asterix books, the start of a lifelong passion for the work of Goscinny and Uderzo’s diminutive Gaulish hero Asterix and his over-sized friend Obelix.
It’s almost a cartoonist’s cliché to say that he was influenced by Asterix. But I can honestly say that I really learnt to draw cartoons by studying these books. The ink stained page of Asterix and Cleopatra shown here is proof of that, one of a long line of ink bottles spilt in my pursuit of mastering drawing with pen and ink. I loved Uderzo’s drawings, and Goscinny’s wit (the books Uderzo penned after Goscinny’s death never were quite up to scratch, in my opinion) and it would be a blatant lie to deny their influence on my work.
I think it probable that I have unconsciously borrowed from them more than once as the lines and images of those books were so hard-wired in my pre-pubescent brain. Their movements, dialogue and interaction have taken the form of archetypes in my imagination and it’s to those memories that I reach first whenever I start working on a new panel. You simply have to look at my own creations, Otto, the lovable but slightly dim-witted elephant and his clever little pal, Crackers, to see the resemblance.
Not that Asteix and Obelix were the first pairing of this sort. There is a long and venerable line of big and little pals, Laurel and Hardy,  Abbott and Costello, Gilligan and the Captain and Ren and Stimpy, just to name a few. So my dynamic duo is in good company.
But yet, when I look at Otto breaking into the zoo in the page that I was inking this week, I can’t help but think that Obelix has gone through a few similar doors in a similar way in his illustrious career. So thank you Uderzo and Goscinny for inhabiting my imagination. 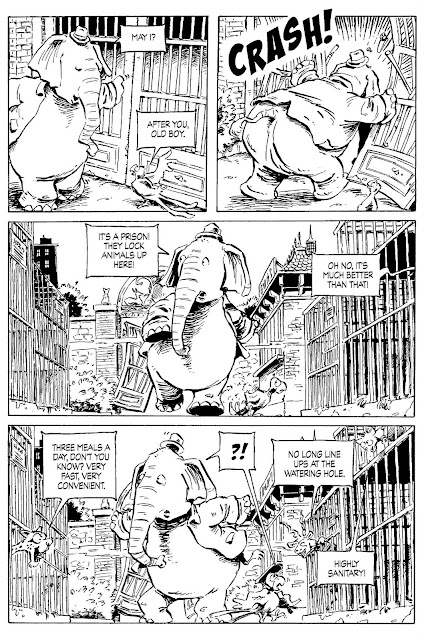 Inked p. 45 of Big City Otto. No mistaking the Asterix influence here!
As an aside, a few years ago I had the opportunity to meet and spend some time with Anthea Bell at Serendipity, an international children’s literature conference held every four years  in Vancouver, B.C.  Anthea is another member of my pantheon of heroes, the small and silver-witted translator of all the Asterix books into the English language. Most of the puns are hers, as are many of the voices we read in translation. I don’t really even know how Asterix reads in French as her translations of the text are all I’ve ever encountered! 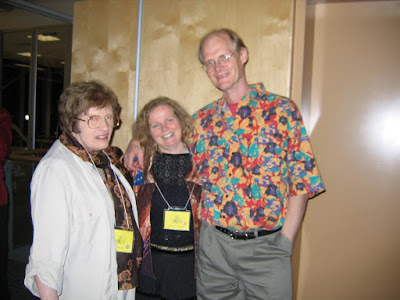 Anthea Bell, the English language translator of Asterix, my partner Esperança Melo and me (a fan!) at Serendipity in 2007.

Email ThisBlogThis!Share to TwitterShare to FacebookShare to Pinterest
Labels: influences