So an elephant and parrot walk into a bar … 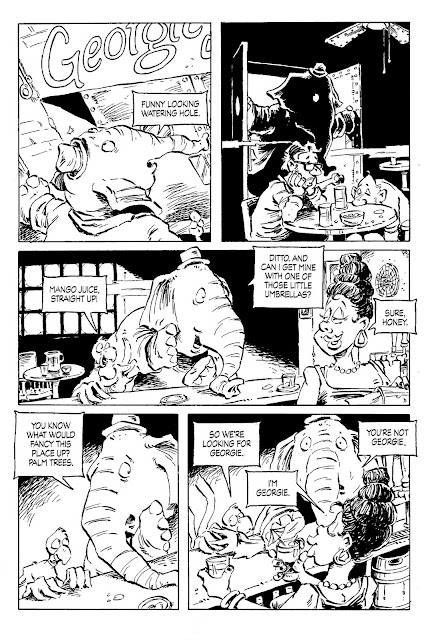 I was inking in this bar scene this week (see above) and it got me thinking how it’s funny how ideas morph. When Esperança (my co-writer and sounding wall on this project) and I were originally hashing out the ideas for this first book of Elephants Never Forget I had it in my head that it would be funny if the only human in the city that sees Otto for what he is (an elephant) is a drunk. It was consistent with the cartoon logic that donning an overcoat and fedora is enough to make Otto invisible to the people he meets, or at least not visible as an elephant. It’s sort of a running joke throughout.
So I wrote that in, and then realized that it offered the chance for a double pun with the old chestnut “ So an (insert animal here) walks into a bar …” joke. My original script and first thumbnails had one drunk telling another the joke as Otto and Crackers walk in.
But then it seemed a bit lame, the whole drunk at the bar thing, so the joke got axed, the drunks relegated to non-speaking parts (and technically not drunk to satisfy the concerns of my children’s book publishers, although clearly they are). 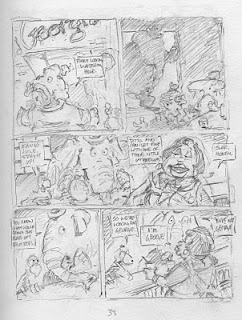 Thumbnail, second draft, of the bar scene.
About this time my editor, Tara Walker, points out that there is a real dearth of female characters in my story, so drunks out, joke out, male bartender out, female bartender in. In my thumbnail above you can see the first take on this, but then I’m thinking I don’t like her look, knock it around a bit more with E. on one of our brain-storming walks and come up with a character loosely based on an amalgam of some of the great female R&B singers, giving us the worldly yet caring bartender/owner, Georgie who you see above (no, another Georgie).
And that’s the way the comic script scrambles…
Posted by Bill Slavin at 3:08 PM