A Star is Born - Imagining Otto

In the fall of 2007 I had the honour to be invited to a francophone comic book festival held in Hull, Quebec (Rendez-vous International de la BD de Gatineau. http://www.slo.qc.ca/rvibdg/bd_menu.html I was one of two token Anglo artists, the other being Tom Fowler, a brilliant and irreverant Canadian cartoonist who is now one of the self-described “Gang of Idiots” down at Mad Magazine http://bigbugillustration.blogspot.com/. The other participants were mainly European comic book artists, flown in from France, Belgium and Switzerland, as well as some local Quebec artists. The star of the gathering was Emmanuel LePage, a French artist, an awfully nice guy and one of the best currently working in the genre. http://lambiek.net/artists/l/lepage_emmanuel.htm
I had been invited on the strength of my “Good Times Travel Agency “ series http://www.kidscanpress.com/Canada/Good-Times-Travel-Agency-C5060.aspx?section=5&series=2
that I created in conjunction with Linda Bailey. I felt a bit like an imposter, like someone who had snuck into a room full of the great via the service entrance, but my guests, with Gaelic charm, made me feel at ease, assuring me that I was a legitimate participant.
European-style comic book festivals differ from their North American counterparts. These are serious affairs, with the invited artists feted and wined and dined, signing books for hours for fans, mostly adult, who line up equally long for the opportunity to have their books signed. The fans are a different breed, men and women with a deep love and affection for this art form who travel many miles to be there. Even the signing was something I have never seen before. The artist would spend 10 to 20 minutes with each and every person in their line, inscribing their book (or albums, as they’re called) with an original sketch at the front.
Being a virtual unknown in this world, my own line was short (well, non-existent). But one of the BD enthusiasts asked for a sketch for her wall, and I put down on paper a quick image of an elephant in a trenchcoat and fedora. Why an elephant in a trenchcoat I'm not sure, but I have always enjoyed drawing animated elephants, that combination of bulk and poise, and it just seemed to work. The image stuck in my mind, and when I came home from the festival, mind abuzz with all the terrific creative energy that had been generated there, I sat down and put down a couple more drawings in my sketchbook. I didn't know it yet, but Otto had been born.
Below are two sketches of early Otto, the first somewhat sinister-looking as I really had no idea where all of this was going, the second closer to the Otto that appears in the pages of Big City Otto. 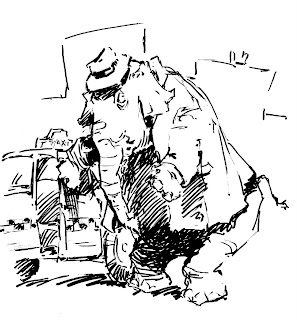 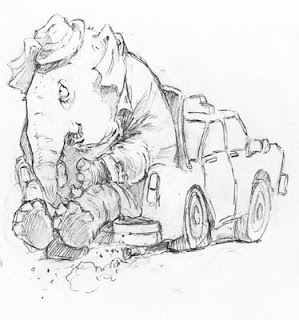 Email ThisBlogThis!Share to TwitterShare to FacebookShare to Pinterest
Labels: conceptualizing