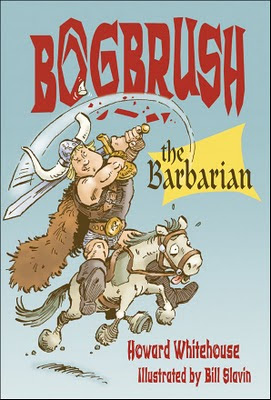 Slightly tangential from my diligent and obsessive chronicling of the graphic novel, I thought I would break to announce the arrival of my newest book. Well, Howard Whitehouse’s newest book but I did have the pleasure of drawing some pictures for it.
Returning from two weeks’ holidays in the Azores (I know you missed me, faithful readers  — both of you!) I found the massive yet dull-witted Bogbrush the Barbarian, thews a-glistening, lurking in ambush betwixt the slender covers of a brand new book found amongst two weeks unpaid bills stacked by our cat-sitter on the dining room table.
Now I’d read this story before (naturally, I had to illustrate it — some of us illustrators do that, you know!) but I promptly set aside the long and tedious history of the German – Russian war (see first post, other passions) that I’ve been grinding through (being at Stalingrad itself may have been less exhausting, if not, perhaps, less murderous) and sat down to read the adventure of Bogbrush one more time. I always do this with new books. There’s something about cracking the spine and seeing the whole thing finally together, words and pictures sandwiched between the magic of two covers creating that remarkable text delivery-device – a book! — that never fails to delight. 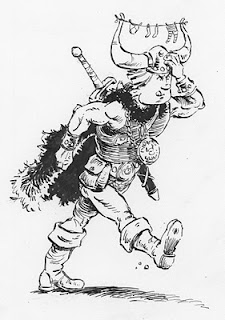 I highly recommend it (Bogbrush, that is, not the tedious history of the German — Russian war. And I would, wouldn’t I, being the illustrator and all) with its laugh a minute. So many, in fact that if you don’t care for one just wait a bit and another will be along shortly (much like buses, if they’d been invented, which they are, but weren’t in Bogbrush’s time. Don’t ask.) And I would be remiss to mention that it also includes some excellent and charming illustrations.
One of the trends that I have seen emerging recently is the return to illustrated novels for kids. It was something that I loved finding in my books when I was young, but had been more or less abandoned at some point, doubtlessly because publishers figured out that they could print books for less if they didn’t have to pay the illustrator. Also, I expect, it was a result of the growth in popularity of picture books, resulting in a stricter delineation between illustrated books (for little kids) and non-illustrated books (for older kiddies). Whatever the reason, some bright souls decided that kids didn’t want or need pictures to go with their slightly more wordy books. Wrong, of course. 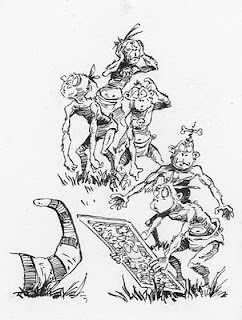 So I’m glad to see the trend reversing. For a number of years now I have been illustrating a series of first novels for Formac, the hilarious Morgan stories written by Ted Staunton. The pen and ink illustrations I have done for those books, and later, Howard’s books, are some of my favourite work and that mostly akin to what I am now doing in my graphic novel (there, I tied it in!) I have always loved pen and ink work and for the first thirty years of my life or so rarely did anything in colour. Pen and ink is still my medium of choice, my early inspirations being some of the great Mad Magazine illustrators of the 50’s, people like Wally Wood, Jack Davis, and Bil Elder that I found in my older brothers’ and sisters book cases when I was growing up, reading by flashlight after bedtime under the covers. 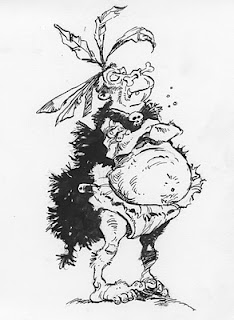 Bogbrush is the fourth of Howard’s novels I’ve had the pleasure to illustrate, the first three being The Mad Misadventures of Emmaline and Rubberbones series. This one is clearly more down market, as Howard will readily admit, down in the sense of being written for a younger audience. In time, as his comic genius is properly recognized, many will claim to have discovered Howard and Howard will doubtlessly claim to have discovered himself. But I do take pride in being the person who introduced him and his work to Tara Walker, editor extraordinaire at Kids Can Press. An introduction that I’m proud to say lead to the publishing of his first novel for kids, The Strictest School in the World. (Not, I should point out, his first publication, having previously authored some sort of book on the Boer war, I think, that Howard claims nobody read as well as numerous hilarious rule sets for various miniature-based games, sold in their dozens world-wide. But I digress from my digression.) I fell in love with his whacked out sense of humour on my very first reading of his manuscript, which had been forwarded to me by a mutual friend. So as I was saying, I had the great privilege of introducing Howard’s work to Kids Can Press, with the caveat that, should it be published, I would be allowed to illustrate it
Anyhow, ‘nuff said. My reading recommendation of the week: Bogbrush the Barbarian by Howard Whitehouse, illustrated by me. If you want to see more of it check out the “New Books for 2010” page at the top of this blog. 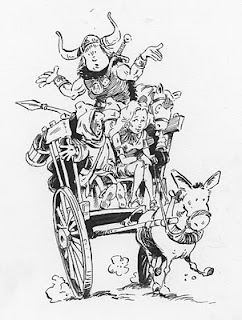 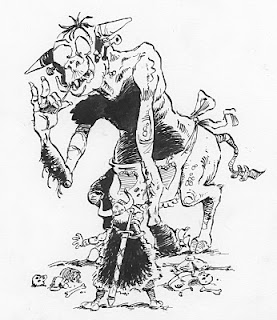