The Man with the Wooden Nose

Pencil rough for bottom panel, p. 46 of Big City Otto.
Every hero needs an anti-hero, and for Otto it’s The Man with the Wooden Nose. But it was a strange and twisted trail that brought this shadowy worm out of the woodwork.
He began life as The Man with the Ten Gallon Hat, the outwardly affable yet deeply sinister fiend that had spirited Georgie the chimp away to America before our own story begins. But it was felt by those in high places that there may be an unfortunate confusion with other literary figures out there in the big wide world, so a makeover, although strongly resisted, was inevitably in order. My editor, who had championed this project from the first, expressed the view that the story was strong enough to survive on its own merits, which was a nice thing for her to say!
So my co-conspirator Esperança and I bandied a few ideas around, beginning by considering other headgear – pith helmets, Scotch bonnets, baby bonnets – but then moving away from the hat idea completely. “The Man with the Rubber Gloves” eventually emerged, but was discarded as too creepy. He was followed by “The Man in the Green Galoshes” (too cute), before we finally settled on “The Man with the Wooden Nose”.
This seemed to strike the right balance between the macabre and the silly, and rather than simply being an "also ran", offered up possible interesting back stories – nose chewed off by vengeful piranhas deep in the Amazon, a motivating case of probiscus envy when The Man with the Wooden Nose finally meets his nemesis, Otto the elephant. So the moniker stuck, and what began as a change generated by outside forces ended up being a change, I think, for the better.
Spoiler alert, but The Man with the Wooden Nose doesn’t even make an appearance in the first, or even the second Otto stories. In a way it is better to let him build in the reader’s imagination, although if pushed, I would say that I have imagined his nose as some sort of over-sized wooden prosthetic attached with leather straps and buckles. But as that particular image is yet to make it to paper, it may still change.
Anyhow, here is the page I was colouring today, where a jive-talking musician with an unfortunately large hooter is mistaken by Otto as his arch enemy. Ah well, nothing a little flattery won’t fix! 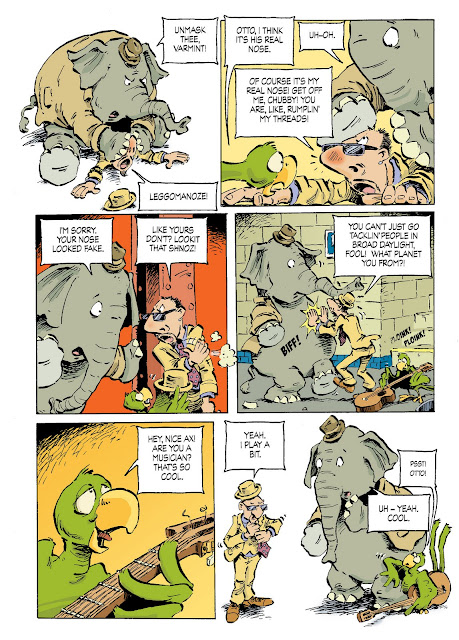